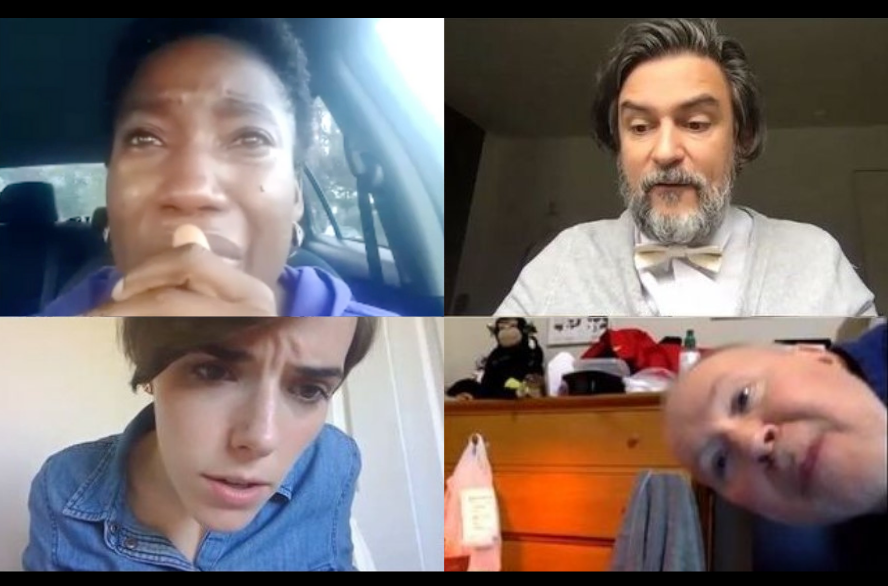 THE BGB STUDIO PRESENTS 4 series of Short Films created over Zoom (and film) that prove that the best art is often created in challenging and limiting circumstances.

As we began to look at our world differently in March of 2020, we started creating work in the virtual sphere, expanding the boundaries of the platforms available. These stories encapsulate a dual experience many of us have been facing for so many months now- the pain in relinquishing expectations of how life is supposed to be and simultaneously knowing more than ever what is truly important and worth our time in life: love and human connection.

The 35 pieces were written, performed, directed, produced, and edited by these unwavering groups of actors as a team effort on Zoom. The ensembles of THE WORK + IN REHEARSAL, along with the class of MAKE IT, poured their hearts, their talent, and their voices into pieces that each represents a different take on life in the virtual space, Covid-related and beyond.

As we continue to watch the impact of pandemic in the world, the interconnected nature of humanity is more with us than ever. With this work we celebrate some of the challenges this historic time has put us through and how we have still managed to love, forgive, grow, and even thrive, despite it all.

IT'S A DNA THING

IT'S A DNA THING

Just a little Zoom call between siblings...with one giant ask. Episode One in "A Birth Story" series, Laura and Helen are starting a family.

A mother /daughter reunion on Zoom is filled with new life and some hard truth.

COMMIT TO THE ANCHOVIES

COMMIT TO THE ANCHOVIES

Old bffs make food, talk pandemic and share about the heartache of marriage and children.

A therapist tries to help his patient.

HOW IT’S SUPPOSED TO BE

HOW IT’S SUPPOSED TO BE

Helen and Laura cannot be together at a time when they need each other the most.

Mike looks for answers in his sister Cassie, but just can't.

Laura needs something from the last person she wants to talk to.

TELL MY WIFE I LOVE HER VERY MUCH (SHE KNOWS)

TELL MY WIFE I LOVE HER VERY MUCH (SHE KNOWS)

Helen and Laura take a moment to connect at the end of a very important day.

Garth tracks down a long-lost godchild and loses his religion.

Little Boxes: I Think You're on Mute

When a couple schedules a romantic rendezvous on ZOOM, it takes more than candles and a funky beat to get them in the groove again.
‍

Written and Directed by DOUG TOMPOS

In Memory of MARCY RUBIN

A father tries to help his son find peace as he struggles to claim his wife's dead body during a pandemic.

He and She are dead. Will they stay together in the afterlife or will death do them part?

You thought divorce was hard? Try it during a pandemic.

After meeting at an online Happy Hour, two lost souls drink and commiserate. In private.

A front-line worker and her devoted husband separated by long hours and the Quarantine finally get to Zoom.

Written and directed by Sydney Walsh

JOHN AND PETER AT 23 DAYS

JOHN AND PETER AT 23 DAYS

A father and son navigate their difficult relationship during the early days of lockdown.

When a lonely man contacts his ex-girlfriend during a pandemic, their relationship takes a few unexpected turns.

A Day This Year

After the tragic death of her son, a grieving mother struggles to take matters into her own hands to get the rightful justice her son deserves.

Caught in the pandemic, having to share hr house with her recent ex-husband, Kat tries to keep the status quo of her new online sexual relationship with her "boyfriend," as he pushes to break through her walls.

What Day IS Today

What Day IS Today

Mr. Carmody attempts to prove that an unlikely friendship with his Therapist is possible in the times of the New Normal.

Two longtime friends reconnect during quarantine and struggle to face the stark differences in their circumstances.

A sudden release program in the American prison system forces a bureaucrat and a convict to discover they have more in common than either of them might care to admit.

A WALK IN THE PARK

A WALK IN THE PARK

Writing partners with opposing outlooks on life try to get some work done in a world of isolation, masks and untouchable dogs.

4 friends navigate the shifting landscape of their relationships during a very uncertain time.

Pushing 40, Lucy, long dedicated to her career, yearns for a family that has eluded her in New York. During an evening Zoom call, she asks an old high school classmate to fund a business idea…only to discover a deeper need just beneath the surface.

A miner on an isolated outpost is prepping for her return to Earth before getting a video call, but it’s not from her supervisor.

A woman must choose between her dreams for the future, and an undeniable connection with a man who is unable to make them come true

An apologetic, aspiring actor attempts to reclaim her identity when a careless, big-shot director refuses to acknowledge her cultural insensitivity.

Coconut Problems follows the everyday problems of Fiona, a Latina born and raised in Los Angeles. In this episode, after having just lost her job, Fiona interviews for a bartending gig.

When a young man’s world has a crumbled around him, he turns to his Mother’s love and it’s more powerful than he thinks.

A mom who has had it with high-pressure parenting culture has zoom happy hour with an old friend, only to discover her friend has an ulterior motive.

A talented interior designer struggles to stay above the fray when she discovers she’s been stabbed in the back.

‘Distant’ is a portrait of long distance love at an impasse. Upon Annie’s fateful confession, Dylan is left to question where he stands…

Written by Andrew B Lipson

Andrew B Lipson – as Dylan

When a mom wishes her friend a happy birthday during Covid lockdown, she ends up giving her much more than she could have ever anticipated.

Didn't find what you were looking for?

Back To All Films

Are You Ready for Class?